Mississauga, ON, June 2013–With YouTube quickly growing as the #1 destination for viewed content online, it is a compelling stomping ground for any Toronto video production company. Signature Video Group is no exception. When faced with the somewhat daunting task of getting eyes on your hard-earned media, the formula often eludes many. We set out to address some of the practices that have worked on our side in our retrospect of the St. Louis Bar and Grill Wing-Off, with our digital-era celebrity competitor, “Furious” Pete Czerwinski.

In order to drop a landmark event, you need a landmark partner. You need to effectively match your creative process with the vision and purpose of your end product. In our case: A world-class, record-shattering competitive eater versus a tantalizing crack at some of the best chicken wings in the region. We approached St. Louis with the idea to conceptualize, produce, execute and package the whole epic throw down from start to finish.

Why stop there? Sure, Furious Pete can probably do a solid number on a small truckload of helpless wings but wings don’t put up much of a fight on their own. Throughout the brainstorming process, we felt it best to bring in some competitors to ‘up the stakes’ and jumpstart brand engagement at the same time!

When he isn’t crushing the Michael Phelps Food Challenge or dead-lifting 600 pounds to burn the roughly 12,000+ calories devoured in the process, “Furious” Pete Czerwinski is busy managing the business of his YouTube stardom.

After recently breaking the 400,000 subscriber mark on his main YouTube channel – and very much on his way to 500k), over 26k Twitter fans, 78.8k Facebook ‘likes’ to start, Furious Pete has massive social media reach. This reach extends beyond his accomplishments as one of the worlds most decorated competitive eaters and includes his recovery from a former eating disorder, evolution into a powerlifting fitness guru/spokesperson and all-around Toronto-born good guy. Let’s just say his appeal is about as universal as it gets, with a target audience that would rival almost any red-carpet cruiser. Pete is always up for a challenge and even more excited around any opportunity to connect with his fans.

Leading up to the day the Furious Pete Wing-Off and Patio Launch dropped on St. Louis Bar and Grill – Mississauga, three lucky contestants were chosen to square off against the champ through a Facebook engagement. We dropped by, roughly two weeks prior to the event, to shoot a ‘teaser’ promo. This served as our call to action for fans to come and try their hand at competing and for the meet-up during and after. A few well-placed exclusive Red Bull product samples and a bombin’ DJ (DJ Passout) set the musical stage for the patio launch as well.

With the teaser alone racking up 12k views in a mere 2 weeks, the moment was primed for a stellar event with super-charged engagement. Below is the actual branded content marketing spot we produced for St. Louis Bar and Grill, measured over a handful of days following the event.

In short: excellent reach for a single-day event, incredible engagement for fans of both Pete and St. Louis Bar and Grill and over 4300 hours of time actively and electively watched, where the St. Louis brand is featured.

We reached out to local media and leveraged our own social media and digital presence to earn the following media. While social and digital weren’t included on the client-side for this video production, we did a little pro-active ‘reaching’ of our own: 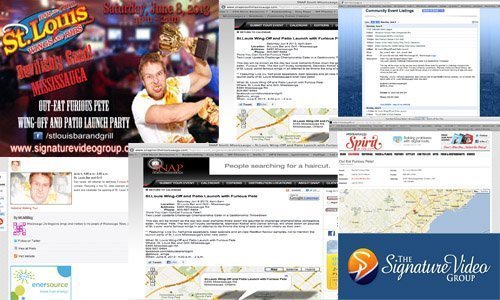 Under consideration of the fact that these are simply first-hand impressions, manually tallied (except where analytics are available to Signature Video Group) the true reach of this campaign is, without doubt, significantly higher than the modest estimate listed.

After final revisions, solid branded video content with a YouTube Celebrity and over  a quarter million digital impressions, we consider the St. Louis Furious Pete Wing-Off and Patio Launch Party to be a success and a comprehensive digital marketing event we are extremely proud of. Our thirst to produce the very best corporate video and content marketing campaigns for our clients is fuelled further by our passion for video production in Toronto.

Let us know what you think and get social with us for more updates, behind the scenes exclusives and video features!

Brad is a business communicator with a penchant for anything digital. In his exploration of content development, social media strategy, technology and training, Brad has produced hands-on programming for national brands, such as: Loblaw Companies Limited, Apple Canada, Encore Market Engagement and the Music Industry Association.